As Wednesday was National HIV Testing Day, STAR TRACK sent two teams to a couple of testing sites to offer free rapid HIV testing. I was a part of the team that got sent to the Walgreens in Highlandtown. Due to the greater number of Hispanic and Latinx people in the area, and as the only Spanish speaker on our team, I was assigned to this site in order to engage with members of the community who were exclusively fluent in Spanish. For me, as a lover of languages and a firm believer in the importance of health screenings, I found myself in the best possible position to engage with the community in a way that I felt was important, while at the same time utilizing the some of the skills that I have acquired in my academic pursuits. However, for the first few clients I spoke to in Spanish, I absolutely floundered. And while the clients were able to understand what I was trying to say, which is definitely the most important aspect of communication, I was still rather dejected and disappointed in myself. But after a while, my fluency started to come back, and by the last few clients, I was able to converse without messing up every other word. Aside from that, I was able to canvass for our organization in the vicinity of the Walgreens, thereby getting to see many of the different businesses and getting to talk to many different members of the community. Having never canvassed before, it was, for me, a very useful experience with regard to concisely formulating a 30-second paragraph about the mission and actions of STAR TRACK. And finally, I was able to better acquaint myself with my coworkers, as we mostly went together through the aisles of the Walgreens and the streets of Highlandtown to offer our services and talk about STAR TRACK.

This week, I got the opportunity to help with a press conference done at the Franciscan Center about some new partnerships to bring fresh, sustainably grown fish to our food services. I think one thing that I’ve learned a lot from this experience so far is the amount of behind the scenes work that has to be done to get any of the services going. The bureaucratic and desk work (filing, shredding, sending mail, networking, etc) that seems so removed from the actual impact is not totally glamorous or interesting to me but is 100% necessary for everyone to contribute to. And I remember talking about impact during the first reflection session, and this kind of goes hand-in-hand with being unable to feel/sense the longevity of impact; doing the behind the scenes work can make it hard to see any real contribution to your cause. For example, for the press conference, we cleaned the building, contacted media and other representatives, filled out paperwork for photo release forms, organized parking, set out food, etc–all for something that only lasted about 15 minutes. But nevertheless, the ordeal was important to share the work that the FC is doing and invite others to participate. I think the most important thing to remember is that the work that we’re doing requires humility and a sense of the wider picture; it shouldn’t be centered around yourself, your own satisfaction, misgivings, or lack of understanding because every contribution impacts the larger picture in some way–positively or negatively.

The rest of the week, I became better at doing interviews, registering clients, and signing them up for different services (yay!). In order to get better at that, I was shadowing other social workers. It’s not even the skill of registering folks that I hope to improve on, but the way that my coworkers are able to connect with clients coming from all situations and walks of life. Maybe part of it has to do with personality/extroversion or just experience, but they always seem to know how to say the right, comforting thing. Many of our clients also rely on faith, so I’m not totally literate on communicating motivation through faith. For example, there were these two women who were struggling to pay their energy bill, and my coworker had given them hope that we would be able to pay it all–but then realized that it was actually a mistake and that the bill was still extremely high. He was able to apologize and comfort them by telling them stories and that the challenges that God presents them show you your strength. Sometimes what others need to hear are not things that I truly believe in or believe I can say, so I hope that I can find my own way of consolation and support. 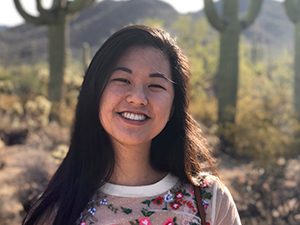 “Oh yeah, Tavon, you okay? Your sister told me there was a shooting by your house yesterday.”

“Yeah, Tailor heard the gunshots and pedaled home real fast. She was crying but we good.”

We were playing an intense round of Uno when two of my campers casually had the conversation above. They continued analyzing their hands, trying to decide the best strategy to get down to one card, but I felt myself tensing up at their words. Should I say something to them? Should I just not comment? I’m their counselor–I should probably try to comfort Terrell. How do I do that though?? My instincts told me to say sorry, but sorry for what? That they had to fear being shot while riding their bikes? That our lawmakers were turning a blind eye to the pervasive culture of gun violence in Baltimore? Saying sorry wouldn’t change any of those realities, but I said it anyway. I asked them how often they heard gunshots. Every three weeks, maybe every two. I asked them how they felt about it. Scared but used to it. Even though my heart broke for them, their answers didn’t shock me so much as sadden me. This was their normal, and while I have known that the city has been wrought with this sort of violence, it was still rattling to hear my ten-year-old campers mention it in passing.

It’s small conversations like this from peace camp that are gradually making Baltimore and its beautiful struggle more real to me. I am putting faces to problems, faces of kids I have grown to really appreciate in just one week. While I don’t always know exactly what to say to them in these moments, they make me want to keep listening and learning, to keep investing myself in them and this city.

“I’ve been to way too many funerals,” Mark says. “Way too many.”

I’ve been to only one before. But my supervisor Mark has been to a countless number—to the funerals of his clients who were just kids, back in the community after a brush with the law. Another shot dead in Baltimore.

In 2018 so far, there have been 135 homicides in Baltimore, 120 of which were the result of a shooting. It has been strange and grim to realize that once out of our purview, we don’t have control over what happens to these kids I have met through my internship. We can be fierce and zealous advocates for these kids’ voices and get them released from detention, but the streets of Baltimore can be unforgiving. To be honest, the thought of that makes me want to cry.

I’ve never been someone who could compartmentalize. My emotions are always directly invested in my work, my relationships, in the way I experience life. But in the workplace, I do try really hard to be very professional and composed. I try to not show the side of me that is moved to tears easily because I know that in a patriarchal society, women are already seen as overemotional, and incompetent because of it. I want to be seen as competent. Because I love writing, thinking, and analyzing, I want people to know that I am logical, rational, and able to craft a great argument. Sometimes I’ve felt that my emotions couldn’t be a part of that.

Working at OPD has challenged that part of myself. Especially watching all the public defenders at work, I’m realizing how deeply invested they are in their work and their kids. They don’t emotionally disinvest to do great work. They emotionally invest in their clients and pour their heart into every case, every rational argument. Sometimes that means feeling disappointed and sad when things don’t work out, but acknowledging that trying your best is enough.

Last week I had to leave a courtroom because I got super emotional, and I felt embarrassed. But more and more, I’m realizing that there is strength in caring so much that your body can’t even hold the feeling in anymore. I’m going to continue to care and do great work because I know the two aren’t mutually exclusive. I’m going to let myself feel, deeply and wholly. 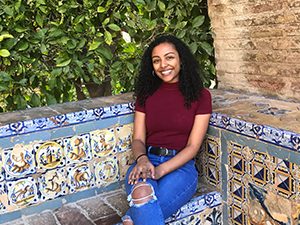 On Friday, my supervisor told me that we will be hosting some volunteers in the studio later that afternoon. FORCE usually sets up two options for volunteers in the studio: volunteers can either take photographs of quilts and check them into the database or if they are feeling artistic, they could work on quilting or stenciling. The volunteers came in at around 12:30pm and they ended up being two people – a very bubbly young woman who I learned was doing Americorps and her mentee, a 14-year-old boy who I found out will be going to Woodlawn High School in the fall. He wanted to work on the stenciling so we all gathered around one of the tables and began to cut out letters of the alphabet from the fabric with our fabric scissors.

After learning more about the woman and speaking to her about what she does at the non-profit organization that she works for, I thought that the Americorps worker was a very inspiring person. She told me that she graduated from UMBC last year where she earned degrees in Psychology and Women and Gender Studies. She joined Americorps shortly after and began working for a non-profit’s youth program. The youth program recruits youth from various counties around Maryland such as Baltimore County, Montgomery County, Howard County as well as Baltimore City. Over the summer, the non-profit organizes fun and community service activities for the youth as well as gives them assistance with resumes, applying to jobs and colleges.

I was really interested in learning more about Americorps and doing some type of program similar to that after graduation, so I asked her why she joined Americorps and what her experience with the program has been. She told me that she is interested in public health and wants to stay in Baltimore and work on community-level issues and she thought that this opportunity would be a good way to start. She said that she found it definitely fulfilling but the stipend for the program is small, so she has to live with 5 people and worries about affording to pay for rent and other necessities. Her year with Americorps is almost over and although she thought that her work was impactful, she believes that there are more systemic issues at hand, so she wants to go back to graduate school and hopefully earn an MPH focusing on community health at JHSPH. She said that she was looking for more Baltimore city organizations that the youth could work with, so she found out about FORCE through a friend and hopes to find more local organizations in the city. I thought that her journey was really inspiring, and I hope that she can continue to help and connect the youth to Baltimore organizations and earn her MPH in the future.