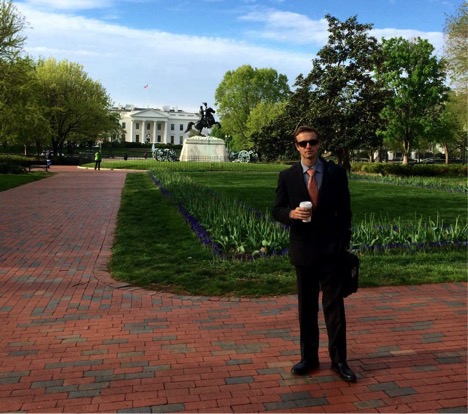 I had only vague ideas about the opportunities available to me when I first met with the National Fellowships Program my freshmen year. Still making sense of the undergraduate research fellowship I had then just received, the Wilson Fellowship, my early discussions with Dr. Barry were formative in casting my ambitions and ideas in more certain terms. Indeed, the NFP helped expand the vocabulary with which I could discuss the places I hoped to go and those that I had come from.

That vocabulary was tested as I tried to translate what I’d learned from my research. What I had documented as a Wilson and REU Fellow challenged me: I studied the social impacts of climate change in environments already visibly bearing its scars. During my undergraduate years I found myself in places I had never expected to be—from Sicily to the South Pacific to Southern Arabia. Sometimes I found myself off-the-grid entirely. Which is to say I was not always the most geographically accessible advisee.

It is also to say that the NFP functions as more than a bridge that connects students to the places, both literal and figurative, that they want to go. Along with all that aforementioned discussing—which took place over Skype more than once—comes motivation for doing. Last March, the NFP sponsored a gallery tour of In the Wake: Rising Seas, Vanishing Nations, a photography exhibit I produced that sought to visually translate the realities of climate change to action.

Through diverse manifestations of support, the NFP inspires applicants to connect the resources already available to them in ways that facilitate personal and professional growth. The inward benefits of piecing apart ideas and putting together applications were as great for me as those outwards ones. Reflecting critically on my place in the local and global community made experiences like the Truman Scholarship Leadership Week in Kansas City, Missouri and the Truman Summer Institute in DC more meaningful. As I’m staring down a departure next month to Fiji—where I’ll continue studying environmental displacement as a Fulbright research grantee—I’m more thankful than ever for the role the NFP has had in not only bringing a new sense of personal clarity to my trajectory, but in shaping it in exciting ways.