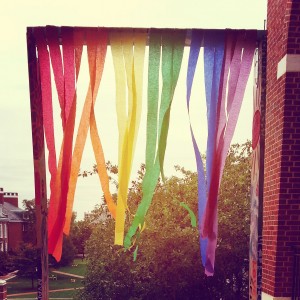 No glossary could encompass the range of identities and terms that are used within LGBTQA communities. If you hear a term you don’t recognize, or feel like someone is using a term in a new way, ask the individual what the term means to him or her. This glossary is meant as an introduction to the community, and is not the definitive answer as to how everyone understands these terms.

Ally: An ally is a person who confronts heterosexism, sexism, homophobia, biphobia, transphobia, etc., in themselves and others out of self-interest and a concern for the well-being of LGBTQ people, and who is committed to social justice and equal rights.

Androgynous: Gender expression that falls somewhere in between masculinity and femininity, or perhaps on some other dimension all together.

Aromantic: Someone who does not experience romantic attraction to others.

Asexual: Someone who does not experience sexual attraction towards other people, and who identifies as asexual. May still have romantic, emotional, affectional, or relational attractions to other people. Asexuality is distinct from celibacy, which is the deliberate abstention from sexual activity. Some asexuals do have sex. There are many diverse ways of being asexual. Sometimes shortened as “ace.”

Agender: Without gender. Often used as an identification for people who do not identify with or conform to any gender.

Biphobia: Fear or hatred of people who are bisexual, pansexual, omnisexual, or nonmonosexual.

Bisexual: A person who is emotionally, romantically, sexually, affectionately, or relationally attracted to both men and women, or who identifies as a member of the bisexual community. Also referred to as “bi-affectionate” or “bi.”

Cisgender: A term for individuals whose gender identity generally matches with that assigned for their physical sex. In other words, a person who does not identify as transgender. Derived from the Latin root “cis,” meaning “on the same side.”

Closeted: Used as slang for the state of not publicizing one’s sexual/gender identity, keeping it private, living an outwardly heterosexual/cisgender life while identifying as LGBT, or not being forthcoming about one’s identity. At times, being in the closet also means not wanting to admit one’s identity to oneself.

Coming Out: To disclose one sexual identity or gender identity. It can mean telling others or it can refer an internal process of coming to terms with one’s identity. In some situations, a heterosexual ally may feel the need to come out about her or his identity.

Crossdresser: Individual who dresses in clothing usually associated with a sex that differs from the one assigned at birth. This is done for a variety of personal reasons. Crossdressing is not indicative of sexual orientation. This term replaces the sometimes pejorative term transvestite.

Demisexual: A person who may experience sexual attraction after a strong emotional attachment is formed. May be seen as falling on the asexual spectrum.

FTM: Female-to-male transsexual or transgender person. Probably identifies as a trans man. Someone assigned female at birth who identifies on the male spectrum.

Gay Male: A man who is emotionally, romantically, sexually, affectionately, or relationally attracted to other men, or who identifies as a member of the gay community. At times, “gay” is used to refer to all people, regardless of gender, who have their primary sexual and or romantic attractions to people of the same gender. “Gay” is an adjective (not a noun) as in “He is a gay man.”

Gender: A socially constructed system of classification that ascribes qualities of femininity and masculinity to people. The attributes of gender can change over time and differ between cultures. Terms for gender identity include woman, man, genderqueer, and agender.

Gender Expression: How one expresses oneself externally, in terms of dress, speech, and mannerisms that society characterizes as “masculine” or “feminine.”

Gender Identity: A person’s internal sense of their own gender. Cisgender, transgender, man, woman, and genderqueer are all examples of gender identities.

Genderism: The belief that there are, and should be, only two genders and that one’s gender is inevitably tied to one’s assigned sex.

Gender Non-Conforming: A person who does not subscribe to gender expressions or roles expected of them by society.

Genderqueer: A person whose gender identity and/or gender expression falls outside of the masculine/feminine gender binary.

Heteronormativity: Processes through which social institutions and policies reinforce the notion that there are only two possibilities for sex, gender, and sexual attraction: male/masculine/attracted to women and female/feminine/attracted to men.

Heterosexism: Norms and behaviors that result from the assumption that all people are or should be heterosexual. This system of oppression assumes that heterosexuality is inherently normal and superior and negates LGBTQ peoples’ lives and relationships.

Heterosexual: A person who is emotionally, romantically, sexually, affectionately, or relationally attracted to members of a different sex. Often called a straight person.

Homophobia: Fear of, hatred of, or discomfort with people who love and sexually desire members of the same sex. Homophobic reactions often lead to intolerance, bigotry, and violence against anyone not acting within socio-cultural norms of heterosexuality. Because most LGBTQ people are raised in the same society as heterosexuals, they learn the same beliefs and stereotypes prevalent in the dominant society, leading to a phenomenon known as internalized homophobia.

Homosexual: The clinical term, coined in the field of psychology, for people with a same-sex sexual attraction. The word is often associated with the idea that same-sex attractions are a mental disorder, and is therefore offensive to some people.

Hormone Replacement Therapy (HRT): The process by which trans individuals choose to take a prescription of artificial hormones. For trans women, that may include estrogen as well as testosterone-blockers. For trans men, testosterone, or T.

Intersex: Term used for a variety of medical conditions in which a person is born with chromosomes, genitalia, and/or secondary sexual characteristics that are inconsistent with the typical definition of a male or female body. The term differences of sex development (DSD) also describes these conditions. Replaces the inaccurate term “hermaphrodite.”

Lesbian: A woman who is emotionally, romantically, sexually, affectionately, or relationally attracted to other women, or someone who identifies as part of the lesbian community. Bisexual women may or may not feel included by this term.

LGBTQIAA: Abbreviation for Lesbian, Gay, Bisexual, Transgender, Questioning, Intersex, Asexual and Ally. An umbrella term that is used to refer to the community as a whole. Often shortened to LGBT or LGBTQ, but not as a means to exclude other identities.

Lifestyle: A word often used outside the LGBTQ community to describe life as an LGBTQ person, e.g. “the homosexual lifestyle.” Many people find this word inappropriate because it trivializes identity, implies that sexual orientation is a choice, and ignores the variety of lifestyles that LGBTQ people live.

Mono-amorous: The state or practice of having a single romantic relationship during a period of time.

MSM: An abbreviation for men who have sex with men. This term emphasizes the behavior, rather than the identities of the individuals involved.

MTF: Male-to-female transsexual or transgender person. Probably known as a trans woman. Someone assigned male at birth who identifies on the female spectrum.

Non-binary: An umbrella term describing anyone whose gender identity falls outside the binary of woman/man.

Omnigender: Possessing all genders. The term is specifically used to refute the concept of only two genders.

Pansexual: A person who is emotionally, romantically, sexually, affectionately, or relationally attracted to people regardless of their gender identity or biological sex. Use of the term often signals a repudiation of the concept of binary sexes (a concept implied by “bisexual”).

Polyamorous: The state or practice of having more than one romantic relationship during a period of time.

Queer: Term describing people who have a non-normative gender identity, sexual orientation, or sexual anatomy — can include lesbians, gay men, bisexual people, transgender people, and a host of other identities. Since the term is sometimes used as a slur, it has a negative connotation for some LGBT people; nevertheless, others have reclaimed it and feel comfortable using it to describe themselves.

Questioning: Refers to individuals who are in the process examining their sexual orientation and/or gender identity.

Romantic Orientation: A way of characterizing one’s attraction to other people characterized by the expression or non-expression of love/romance/non-sexual interaction. People use a variety of labels to describe their romantic orientation, including aromantic, homoromantic, and heteroromantic.

Same-Gender Loving (SGL): How some African Americans prefer to describe their sexual orientation, seeing “gay” and “lesbian” as primarily white terms. “Same-sex loving” is also in use.

Sex: A biological term dividing a species into male or female, usually on the basis of sex chromosomes (XX = female, XY = male); hormone levels, secondary sex characteristics, and internal and external genitalia may also be considered criteria. Terms to describe sex include female, male, and intersex.

Sexuality: The complex range of components which make us sexual beings; includes emotional, physical, and sexual aspects, as well as self-identification (including sexual orientation and gender), behavioral preferences and practices, fantasies, and feelings of affection and emotional affinity.

Sexual Fluidity: The concept that sexual orientation can vary across the lifespan and in different contexts. This does not mean that it can be changed through volition or therapy.

Sexual Orientation: An enduring emotional, romantic, sexual, and/or affectional attraction. Terms include gay, lesbian, heterosexual, bisexual, pansexual, and asexual. Sexual orientation is fluid, and people use a variety of labels to describe their own.

SGM: An abbreviation for sexual and gender minorities. Used as an umbrella term rather than as an identity for a specific person, particularly in international contexts.

SOGI: An abbreviation for sexual orientation and gender identity.

Stealth: A description for people who, after beginning their transition and living as their preferred genders, do not readily tell others about their pasts, specifically their birth-assigned genders. Others may choose to be more or less open about their trans statuses.

Third Gender: A term for those who belong to a gender category not recognized in the Western binary. For example, Native American two-spirit people, hijra in India, kathoeys in Thailand, and travestis in Brazil. Recognizes that people’s identities are specific to their culture.

Transgender: An umbrella term for those individuals whose gender identity does not match with that assigned for their physical sex. Includes, among others, transsexuals, genderqueer people, and crossdressers. In its general sense, it refers to anyone whose behavior or identity falls outside of stereotypical expectations for their gender. Transgender people may identify as straight, gay, bisexual, or some other sexual orientation. Sometimes shortened as trans or trans*.

Transition: An individualized process by which transsexual and transgender people move from living as one gender to living as another gender. There are three general aspects to transitioning: social (e.g. name, pronouns), medical (e.g. hormones, surgery), and legal (e.g. gender marker and name change). Each path through transition is unique to the individual.

Transsexual: Term referring to a person whose gender identity consistently differs from what is culturally associated with his/her biological sex at birth. Some choose to physically change their body so it matches their gender identity. Use caution with this term as many trans people do not identify with it.

Transphobia: Fear of, hatred of, or discomfort with people who are transgender or otherwise gender non-normative.

Two-Spirit: Contemporary term chosen to describe certain Native American and Canadian First Nation people who identify with a third gender, implying a masculine and a feminine spirit in one body. Replaces the problematic term berdache.

WSW: An abbreviation for women who have sex with women. This term emphasizes the behavior, rather than the identities of the individuals involved.