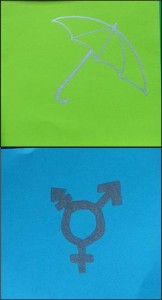 This page is meant to be a brief introduction to transgender identities. There are many excellent resources elsewhere. Consider attending a Safe Zone training to learn more about ways to support transgender people. And check out our transgender-affirmative research page.

When discussing the term “transgender,” it is useful to begin by examining the concept of gender. We begin by separating sex from gender. Sex refers to biological and physical characteristics that are linked with being labeled male or female. Sex is labeled at birth, usually on the basis of genitalia and/or chromosomes. Gender refers to the combination of characteristics, expectations, and roles usually associated with biological sex – often placed on a spectrum between masculine and feminine. The concept of gender is complicated because most aspects of gender are social constructs that vary across time and culture. For example, gender presentation (appearance, clothing, mannerisms, and behaviors) and gender roles (social roles, occupational choices) vary widely depending on the culture and era.

A central aspect of gender is gender identity. Gender identity is the self-image that one has about one’s own gender as masculine, feminine, or otherwise. Often, people assume that gender identity is congruent with biological sex; they believe that a female will identify as feminine, and a male will identify as masculine. However, this is not true for everyone, since some people with male biology feel strongly feminine, and some with female biology feel themselves to be masculine. Others do not consider their gender to be either feminine or masculine, but a blend of both; still others feel that they are neither masculine nor feminine, but some other third gender. It is important to remember that gender is a malleable and variable category.

People who defy gender norms have existed in every culture throughout time. However, the term “transgender” is relatively new, dating to the mid-1990s. It is useful to think of the word “transgender” as an umbrella term that encompasses a number of people who live substantial portions of their lives expressing an innate sense of gender other than their sex assigned at birth. This includes transsexuals, cross-dressers and people who feel like their biological sex fails to reflect their true gender. People who do not identify as transgender can be called “cisgender,” meaning that they identify with the sex assigned at birth.

Often, the word “transitioning” is used to describe the period of moving away from one’s assigned sex into closer alignment with gender identity. Physical transitioning may describe surgical, hormonal, or other changes to one’s body. Hormonal treatments (often estrogen or testosterone) may be referred to as hormone replacement therapy (HRT). Surgical interventions are usually described as gender confirmation surgery. Socially transitioning may describe asking friends to use a chosen pronoun, asking colleagues to respect one’s gender identity, and other acts of disclosure. Legally transition may include a legal name change and changes to gender markers on legal documents.

If specifying that someone is trans is necessary (although it usually isn’t), the following terminology should be used: someone who was assigned female at birth and who now identifies as a man could be known as a trans man or a transgender man. Likewise, someone who was assigned male at birth and who now identifies as a woman might be labeled a trans woman or a transgender woman. It is extremely important to remember that trans women are women, just as trans men are men. Non-binary, genderqueer, and agender people should be referred to in the terms they use to describe themselves.

Addressing transgender people the way they prefer to be addressed (including chosen name and preferred pronouns) demonstrates respect. Some people may choose to use gender-neutral pronouns, such as “ze/hir/hirs,” as in the sentence “That book is hirs. Ze brought hir favorite book.” More commonly, “they/them/theirs” is in use as a gender-neutral singular pronoun, as in “That book is theirs. They brought their favorite book.” Other pronouns are in use; the best way to find out someone’s preferred pronoun is to simply ask. You can learn more about pronouns on our pronoun page.

Transgender people may identify as lesbian, bisexual, gay, heterosexual, or some other sexual orientation. Having experienced discrimination, prejudice, oppression, fear and shame, trans people share commonalties with LGB people. Like LGB people, transgender individuals should not have to hide who they are in order to have safe and satisfying lives. However, it’s important to keep in mind the different experiences held by each section of the LGBTQ community.

To learn more about ways to be an ally to trans people, check out some of the following resources.

Many people have questions about how to send signals of inclusion to transgender people. Regardless of context, everyone can work to create environments that are more inclusive of a diversity of gender identities. Below you will find basic principles of inclusion. These principles can help you ensure that everyone under the transgender umbrella feels welcome. Click the principle to expand for more information.

Use the correct name.

Use the correct pronoun.