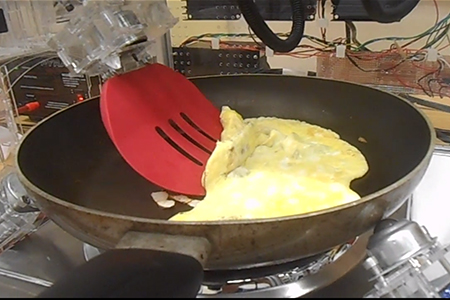 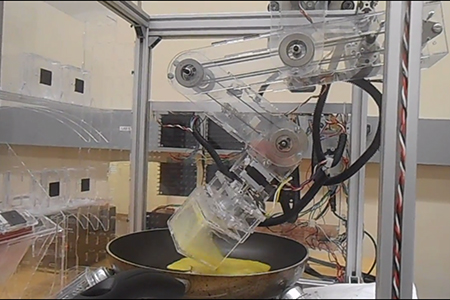 The goal of this project is to create an automated cooking machine capable of preparing user-specified recipes. The design is a counter-top machine to tackle the most basic (yet common) cooking tasks. The user selects the recipe, prepares the ingredients, fills individual dispensing compartments, and presses the start button. The robot selects ingredients, places them in the pan, and cooks the food using a utensil and adjusting the angle of pan to ensure even heat distribution.

This robot was created using an Arduino Mega microcontroller to direct the actuators and sensors. The ATmega chip is programmed using an open source Wiring-based language similar to C++. The Arduino receives a signal from the display interface buttons to begin the recipe. The hot plate turns on, and once the temperature is right, the arm on the Z rail moves over to the ingredients, grabs what it needs, and dispenses the prepared ingredient into the pan. After adding all the necessary ingredients, the arm latches onto the spatula and stirs the food as needed; simultaneously the Arduino controls the pan’s rotation and tilts to work alongside the spatula movements.