Sure, I can binge watch TV shows probably as well as the next millennial can, but doing so doesn’t really give me that same verve that, for me, comes with shooting the breeze and downing some ice cold… lemonades? yeah, lemonades, with some friends.

For the most part, I assumed this need for social engagement extended to the gamut of my activities. I work in software, but really it’s the five minutes of the beginning of a meeting where we recap any fun stories that get me through the day. With extracurriculars, I mainly partake in team sports, and even then, the team sport that I still play most is one that has weekends of tournaments where there are hundreds of athletes (at least, that’s what we in the ultimate community call ourselves) that descend onto large sets of grass fields for two days at a time. I even live with three other roommates, something that I think a lot of people outgrow by the time they’re at the ripe young age of 26. Nothing, for me, is ever solo.

But then this all happened. I don’t want to get political about it, so I’ll just fast forward to the part where I wallowed in self-pity for the duration of the summer. It felt unfair that there was so much out there to do and very few people with whom I could do them safely. It was pretty brutal and I finally decided to do something about it.

Step one was spontaneously (after months of research into other opportunities and lining one up to start a few weeks later) quitting my job. Step two? Freedom. Not the kind of star spangled freedom that you shoot off fireworks to celebrate. The cavernous, anxiety-inducing paradox of limitless choices that surrounds you after you’ve torn down the last wall of excuses that stood between you and actually doing something. Because truly, what WAS I going to do with my time now?

I decided to, surprisingly, take a solo bikepacking trip (which is sort of like backpacking, but instead of a large backpack and feet, you use a few smaller bags and wheels). I got the idea from a friend who is a serious “only brings one outfit to trim off a few ounces of weight” kind of bikepacker and from the fact that I happen to own a bike. It was going to be a three day trip from Boston, where I’m currently headquartered, out to Albany, where I would take the train back. The route I chose was going to be roughly 200 miles on my wheeled steed, with the highest mileage day of my life coming first.

Because of my history of outdoor activity, both through EE and simply recreationally, the thing that worried me wasn’t the camping or the physical exertion, but the brick wall of empty time that I was about to slam into. I chose to ride long days because I hoped they would distract me, but for each 6-8 hours or so of biking, I had to do something to occupy my mind, right?

So, as I set out on my first day of riding less than 24 hours after my last day of work, I queued up as many podcasts as I could find and I set off. And… it was nice! It was an early fall day that let me shed down to a t-shirt, and I had the soothing voice of Michael Barbaro to distract me.

After a while though, somewhere on a side road in the middle of Massachusetts, I paused between episodes and took my headphones out. It was quiet. No cars, few people, and the road sprawled before me. For a while, all I could hear was the smooth rush of rubber against asphalt and the labored draw of air into my body. The warm sun and cool wind fought over the temperature I felt on my skin. I closed my eyes for just a second and imagined I was flying. Then I opened my eyes, and thought about how dumb I would feel if a newspaper headline detailed the death of a biker who crashed because his eyes were closed.

But in that moment, gliding across western Mass, I felt something for the first time. I felt okay being alone. I felt like I could enjoy an activity without needing external verbal validation to let me know that it was worth enjoying. And even if I had only started the trip to prove to myself that I could do the dang thing alone, it didn’t change the fact that I was doing it, and I was liking it.

It’s still hard for me to be alone. I can’t always be experiencing a philosophically-imbued bike ride, you know? But I’d shown myself that it was possible; that I can be alone and enjoy myself if I try. And I’ve been continuing to try ever since. 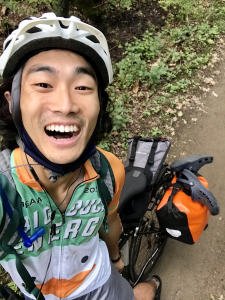 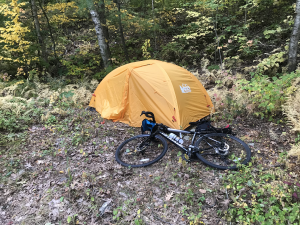