As we work on getting more outdoor content we wanted to welcome you to the weekly Pets of Experiential Education post. To start us off:

Hamilton is my approximately 7 month old kitten. I found her in the woods of Virginia while on a caving trip, miles from the nearest house and covered in fleas, ticks, and dirt. The cave we were at was named Hamilton, and as she was orange we assumed she was male, so we called her Hamilton. I found out a few days later she was female but by then it was too late, and so Ham she remains.

She’s been through the mill having lived outside for what seems to be a significant amount of time. We’ve tackled her fleas and ticks, double ear infections, an infected abscessed bite from an unknown other animal, and a hernia. She’s tough though and never showed any real discomfort, even with a ball of wax the size of a cranberry stuck in her ear.

Her strengths include creating chaos, eating my food, sleeping with her arms over her head, sleeping in strange places (think the dish drying mat and cuddled up with plastic), waking me up at all hours to play, and being the cutest cat that ever lived. She only weighs five pounds so she’s basically an eternal kitten. 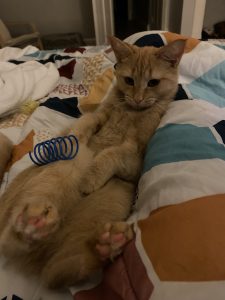